Bangladesh Research and Education Network (BdREN) Trust is the National Research and Education Network (NREN) of Bangladesh. It provides high-speed optical fiber network connectivity to all the Public Universities and a few of the Private Universities spanned across different parts of the country using its own state-of-the-art DWDM Transmission Network. Some of the prominent services that are being provided by BdREN are: Internet, Global Research Network Connectivity, Video Collaboration, IP Telephony, Hosting, Virtualization and Computing, Training, Consultancy and others. One of the most popular services is the “eduroam” service which we are providing to our distinguished members. As of now we could reach out to 20 Institutions with around 2000 APs broadcasting the “eduroam” SSID. 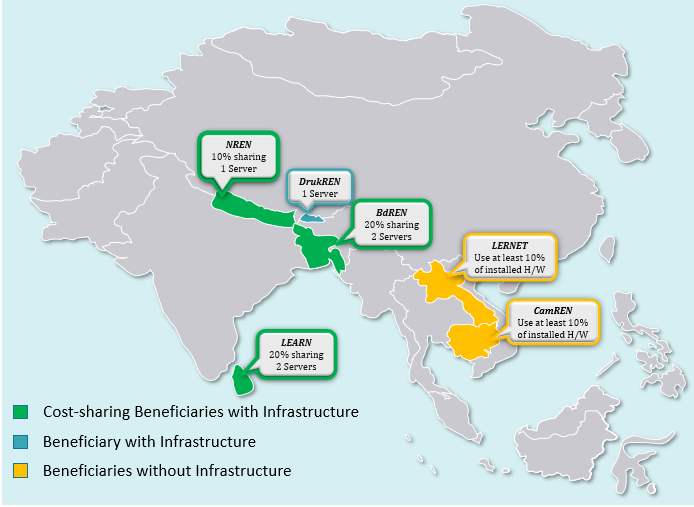 BdREN was awarded with a project named “facilitating Distance Learning using Digital Conferencing facility [fDLuDCf]” under CFP2 where NORDUnet was the technical advisor and Sri Lanka, Nepal, Bhutan, Philippines and Thailand were the beneficiary countries. It was a phenomenally successful project particularly once the pandemic invaded the entire world with all its ferocity and forced the closure of the educational institutes. With almost 20,000 Zoom Licenses shared between 5 countries with Bangladesh and Sri Lanka getting the majority, we could make an outstanding impact in the community by extending the Zoom Accounts to the faculty members to conduct their classes online.

One of the challenges that emerged in the form of NORDUnet’s complains that the beneficiary countries are not allowed to use these licenses in production mode because the load became so high that it started overloading the NORDUnet computing resources engaged for hosting all those classes. All the beneficiary countries came up with the “On-prem” Licensing solution where the load remained within the platform which holds the licenses. The solution could pacify NORDUnet, but it started choking the hardware of the beneficiary countries. NREN and DrukREN, with no computing resources at their disposal, headed into the deepest trouble. Also, LEARN did face similar issues, but they could somehow scrape through by staggering the classes throughout the day and leasing computing resources from larger universities. BdREN overcame the challenges by procuring new hardware.

In order to get rid of such hardware crunching problem in future and in order to cater more meetings and classes in future, this project proposal encompasses procurement of computing resources which will be placed at 4(four) Data Centers in Sri Lanka, Bangladesh, Nepal and Bhutan. In addition to these 4(four) countries, CamREN and LERNET have been included who will be provided Zoom Controller and Zoom MMR facilities from the installed hardware in these 4(four) countries. Other countries participating in Asi@Connect project from LDC, LMIC and UMIC economies may use this computing and memory resources provided there is any spare capacity. This will be amazing resource sharing demonstration in Asi@Connect community. This happened before in the fDLuDCf project where BdREN computing resources were shared with Nepal REN (NREN) in terms of configuring MMR in BdREN Data Center which were used by Nepal RENs.

As a follow-up of fDLuDCf project, all the Zoom licensing resources under this project will be provided by NORDUnet. It is to be mentioned that under fDLuDCf project NORDUnet provided around 30,000 Zoom licenses for six (6) countries which is still there even after the project expiry of the project on June 2021 as a goodwill gesture with the commitment that NORDUnet is not going to withdraw it till a sustainable solution becomes available for all the beneficiary countries.

The project has been planned to be Tri-party financed: